Past exhibition
8 January - 19 February 2022 ONE | LOGAN HEIGHTS
Installation Views
Open a larger version of the following image in a popup:

UPDATE: Electric Picnic Redux has been extended through February 19.

There will be a closing reception on February 12 from 5-8 PM.

Quint Gallery’s ONE will begin 2022 with Roman de Salvo’s Electric Picnic Redux, originally created during a residency at San Diego’s Timken Museum in 2019. Prompted to respond to works in their collection of European Old Masters, de Salvo chose Blindman’s Bluff, a 1775 Rococo painting by Jean-Honoré Fragonard, and focused on a tree on which a whimsical group of French aristocracy play games and lounge about. In Electric Picnic, de Salvo used common modular hardware to rebuild this tree as a metal sculpture surrounded by benches for viewers to become active participants in the main hall of the museum. 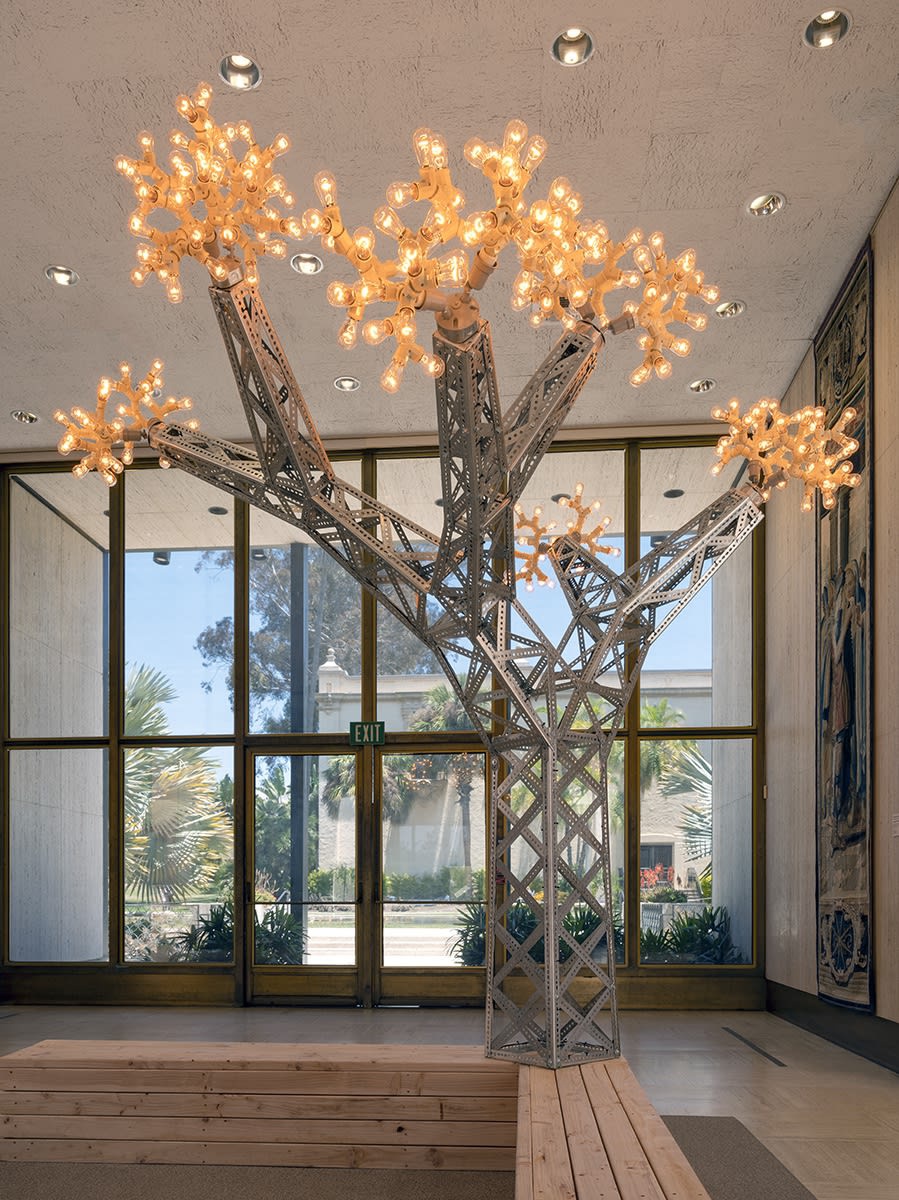 In this iteration, Electric Picnic Redux, de Salvo has replaced those benches in favor of placing the sculpture on an oak log base, as well as removed lights which originally stood in for the leaves and blossoms on Fragonard’s tree. Taken by itself, the work reflects the artist’s long standing curiosity in the duality of material: creating the ornate out of the utilitarian, and imbuing natural, raw material with electricity and modularity.

Roman de Salvo’s public art can be seen throughout San Diego, with his most recent commissioned work at Mission Trails Regional Park. Titled Fountain Mountain, this permanent work is a functioning water fountain built into a boulder carved with trail-like channels around its surface. De Salvo’s work has also been featured at the 2000 Biennial Exhibition at the Whitney Museum of American Art, the 2002 California Biennial at the Orange County Museum of Art, Baja to Vancouver: The West Coast in Contemporary Art at the Seattle Art Museum, Insite 2000 in Tijuana, Mexico, and Giverny Garden Projects at the Musée d'Art Américain, Giverny, France. He lives and works in San Diego.

We will process the personal data you have supplied in accordance with our privacy policy (available on request). You can unsubscribe or change your preferences at any time by clicking the link in our emails.